July 16, 2014
Somewhere along the way, I learned to become an independent researcher. When I have questions, I seek out sources that will be helpful in answering that question, and I learned to discern and ignore unhelpful resources. And when I'm really into that question, I find myself losing track of time and immersed in information. This is part of my "problem" with inquiry into my professional practice. Before I know it, I've requested a dozen books from the Michigan Electronic Library or purchased them via Amazon. I know Amazon's evil, but two-day shipping is so attractive when you have a burning question that you just need answers to. (Before you scold me, know that I just placed an order with a local independent bookstore about a half-hour ago.)

This year, I learned a transformational lesson when asking students to research: They need to develop their own questions.

I only learned this through trial and error. During our second marking period, we use Elie Wiesel's Night to prompt student inquiry. Only this past year, we assigned topics and didn't give students very much choice, even when they complained that they had already been exposed to the Holocaust via their reading of Anne Frank in middle school. And after reading paper after paper that appeared to be a litany of fact after fact, I learned to not make the same mistake again.

Aimee Buckner makes this brilliant point in Nonfiction Notebooks: Strategies for Informational Writing: "Kids do not need to research what they already know. They need to research what they don't know yet" (31). This is one of those epiphanies that made me jump out of my seat and shout, "Woohoo!" This is the guidance I had been looking for. And it's also a good reminder of why we sometimes encounter boring writing. If we don't give students a chance to be creative, to wonder, to explore, we will get things we already know or the same information repeated nearly the same way.

Even before reading Buckner's book, I somewhat stumbled into this train of thought during the second-to-last semester of the school year. When leading students to write their own identity research papers (this is an assignment that I desperately need to rework it this summer), I wanted to give students plenty of practice for finding and utilizing sources.

Leveraging Sherman Alexie's The Absolutely True Diary of a Part-Time Indian, I asked students to develop a question that they had in response to the novel. I told them that Alexie has openly said it was autobiographical, and I encouraged them to question the author's claims. Classes watched Chimamanda Ngozi Adichie's TedTalk, "The Danger of a Single Story," to get them to consider how limited narratives can be.  And then they selected a moment in the book that had genuine questions about. Students proposed questions like the following: 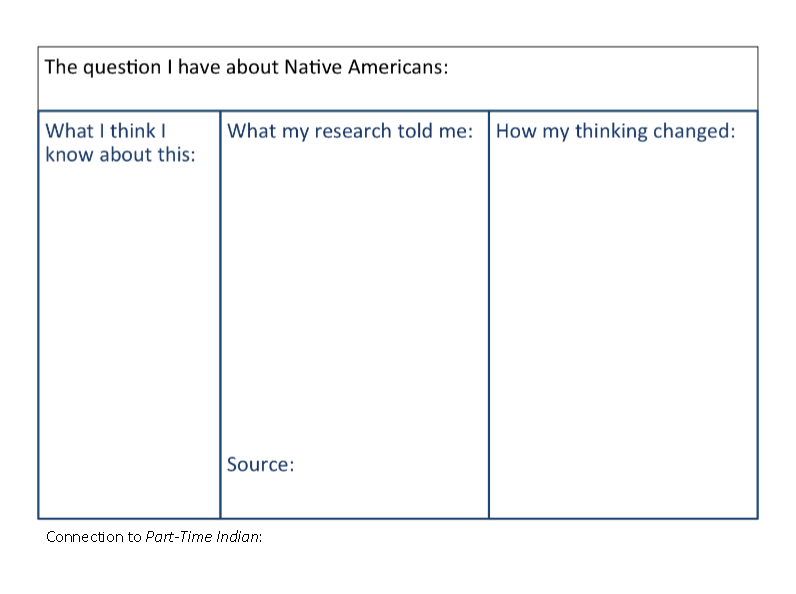 Students engaged in this research over two days, using the graphic organizer to keep track of their notes. I then went on to model cohesive writing, using my own question about Native Americans. The writing that came about after this research was, in every way imaginable, better than the writing that was produced during our first round of research writing.

After noticing this improvement, I also realized that students need to conduct shorter research assignments more often. Partially inspired by Kelly Gallagher's "20 Question" activity when beginning new novels, I realized that positioning students as natural inquirers all the time will help them become more independent learners in and beyond my classroom. And for that, I am excited to implement Genius Hour this fall in my classroom.

Popular posts from this blog

January 31, 2019
I just stumbled upon this behind-the-scenes clip of Saturday Night Live's cue card process. This is intense writing. This is writing that is dependent upon trust and checks and balances. Over a short period of time, skits are written, drafted on cards, revised, and the cards revised over and over again. I also really love that SNL continues to use cue cards and not a teleprompter. Like Wally points out, technology can fail. Handwritten cue cards ensure the show goes on. Comedy is hard work. Writing is hard work. Changes are made up until the last minute to get things just right. This is a form of real-world writing.
1 comment
Read more

April 13, 2020
Brene Brown introduces the "family gap plan" in the fourth episode of her podcast, Unlocking Us . This came about when she and her husband would argue when she would return home from traveling. It seemed like the minute she walked in, her husband would expect her to be ready for him to "tap out," where she could take over where he had been supporting the family. While she was away from home, this didn't mean that she was full of energy and at 100% the minute she walked in the door. She had been working too and was exhausted. So, over time they began to name where they were at as people and as a family: I'm at 10%. I'm at 30%. They knew they needed a plan for when collectively she and her husband were not at 100%, but they needed to be for their family. Beyond our personal lives, the idea of a "gap plan" got me thinking about our classrooms and schools. What happens when we are not at 100% or we know that our classrooms or students are not
Post a Comment
Read more

February 20, 2019
I regularly listen to the School Leadership Series and today's episode, " Slump or Spark? ", made me think about initiatives, goals, and how we often get stuck in the middle. Danny encourages us to think about the middle, the "often overlooked time." He encourages us to think about midpoints, the lull, and how we can transform them into sparks instead of slumps. He encourages us to be aware of them, use them to "wake up," and to imagine that we are behind rather than ahead in order to motivate us out of "coast" mode. He also mentions Dan Pink's When: The Scientific Secrets of Perfect Timing  in the episode. In this book, Pink gives advice for the varied levels of commitment during the middle: "... when team commitment to achieving a goal is high, it's best to emphasize the work that remains. But when team commitment is low, it's wiser to emphasize the progress that has already been made even if it is not massive" (p.
Post a Comment
Read more